Today John and I gave a damsel in distress a jump start, and then passed through Prosperity Oaks Natural Area, an obscure live oak hammock lost beyond redemption in the suburban sprawl of Palm Beach Gardens, Florida.    The area is home to large (by local contemporary standards) gnarly old live oaks and all their epiphytes, and the dank understory.    In the latter, down deep in the shade flourishes a curiosity, Scrub Palmetto. 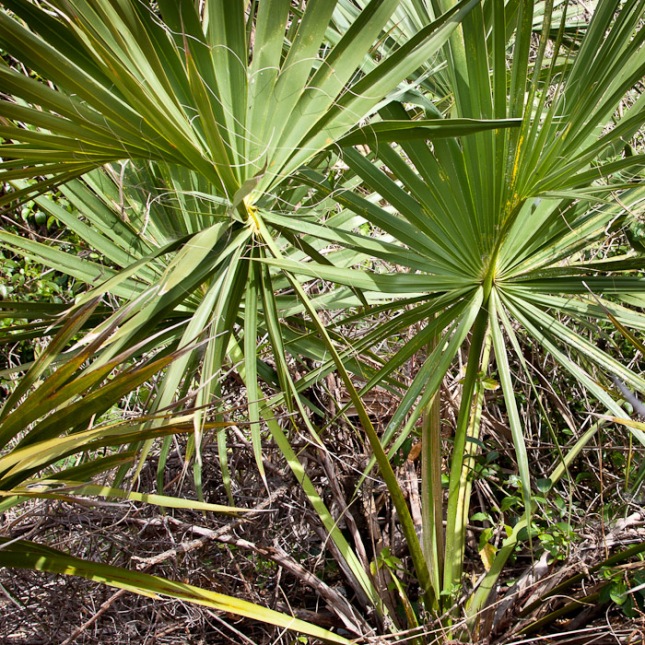 What’s curious is the shaded habitat.    This little palm according to most life experience and plant manuals is a sun-lover usually in open scrub on white sand in the sun-baked company of saw palmetto, low scrubby oak species, Florida Rosemary, and Sand Pine.     So, wazzup  deep down in the dark?   Scrub Palmetto is presumably water-limited and slow growing, so maybe deep shade really is no special problem, conceivably  even beneficially protective.    After all, a lot of palms are shade-tolerant, and those broad leaves could collect light.

Were the little palmettos on the site back if and when it was open scrub before the oaks rose up and took over?  How long would that take?   Seems unlikely.  Or have the Scrub Palmettos wandered in unbothered by the Live Oak canopy?   I’ll put my money on that.

Either way, these dwarf palms are adapted to severe tough times, usually keeping their stems and growing tips subterranean,  protecting the key points from  mayhem, such as death by fire.

In an evolutionary sense, Scrub Palmetto is a local spinoff from its big ancestor, Sabal Palm the palmetto all over Florida, the state tree.   Sabal Palm, aka Cabbage Palm, is widespread,  variable, and  a full-sized tree.   Scrub Palmetto is limited to the Florida Peninsula,  uniform, and three feet tall.

Now let’s speculatively evolve Scrub Palmetto.  What if some variants of Sabal Palm in especially perilous extreme habitats never proceed beyond the exposed-leaves stage, keeping the stem tip buried permanently, and remaining small forever?    That is, living life juvenilized.   It may be that in a stretched historical sense, Scrub Palmetto is essentially a “Sabal Palm” locked in forever as a pre-teen.

Posted by George Rogers on January 26, 2018 in Uncategorized

5 responses to “Scrub Palmetto,  Peter Pan of the Florida Scrub”