Today John and George planned an upcoming botany walk in Seabranch State Park near Hobe Sound, Florida.  We didn’t have much chance to explore new flora and fauna, but no problem, because this is February, time to visit the swamp. There are three reasons I stomp the swamp in February: 1. The low water level allows access to regions nasty during the rest of the year.  2. The bald bald cypresses allow light to the forest floor, promoting green life galore in what would otherwise be the deep dark shadows. A time for bromeliads, liverworts, mosses, seedlings, and marvels to find.  3. No bugs.

Bright spots down in the wet are golden clubs, unique members of the Aroid Family.  I’ve been fascinated with these showpieces ever since I was a student, and for over a decade have enjoyed a population near my home in Jupiter along brackish Jones Creek. With no solid data, I suspect this to be the southernmost population in eastern Florida.  The plants grow directly in shallow water or very near it. 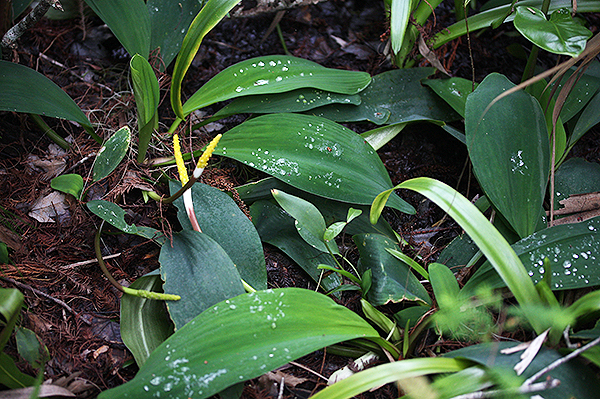 Orontium is a genus with just one species distributed mostly across the eastern United States from Massachusetts to Florida to Louisiana. Oddly, one or two fossil species are known too.  The plants are so odd and beautiful that botanists Robert Godfrey and Jean Wooten used a drawing of one as the frontispiece in their classic manual, Aquatic and Wetland Plants of Southeastern United States. 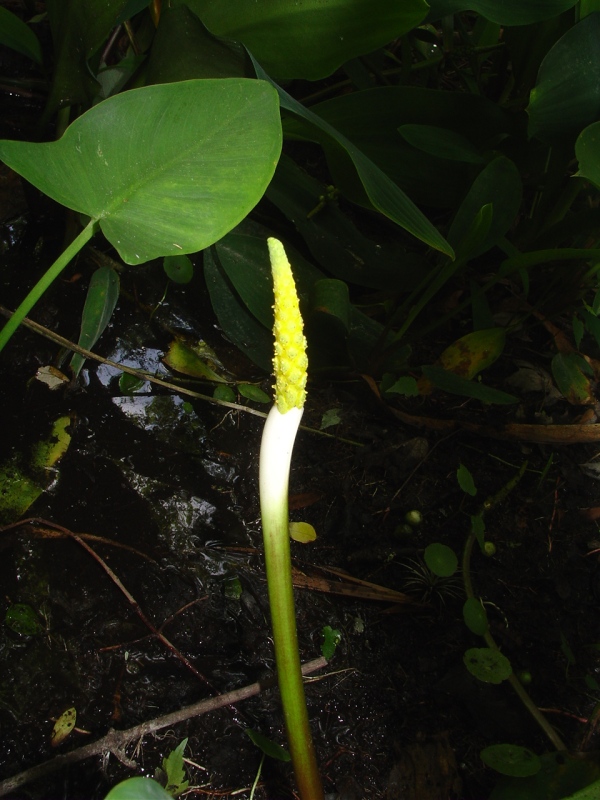 What fly could pass up this bad boy?

And now a nod to the name. A reasonable person might think,  “these are golden clubs, and oro means gold,  well that makes sense.” But according to contradictory reliable research, the name comes from the Orontes River in Syria, with ancient myths, legends, and history, including a different plant the ancient Greeks called by a name similar to Orontium.

Humans have eaten the rhizome and the seeds.  And humans have gone over Niagra Falls in a barrel.   Bad ideas IMHO. Like other Aroids, GC bristles with calcium oxalate crystals.  Lots, and calcium oxalate can nuke your kidneys.    I’m not convinced repeated boilings make it as pure as the polluted snow just because folks who want to eat nature say so.  It you want to eat Aroids, why not go to Publix and buy Malanga Root?

So what’s so weird about golden clubs? Start underground. How many plants do you know with a vertical rhizome? The rhizome is about the size of an upright hotdog, which is a corndog,  buried far down in the swamp mud, and it creeps deeper with time.  The roots are contractile, that is, rubber bands to pull the rhizome down out of harm’s way ready to sprout another day, or to wash ashore far away. Offhand, the only vertical rhizomes on other plants coming to my mind are on ferns.  By the way, another native species with contractile roots is coontie. Golden club leaves look like broad blue-green straps with tiny parallel veins.  Like a duck, water rolls off in sparkling droplets.

Like the hood on my Bentley after Jeeves waxes and buffs.

The best is yet to come, the flowering spike. First a quick lesson on the Aroid Family.  Aroid’s are known to gardeners and Home Depot shoppers as, for example, anthuriums, caladiums, colocasias, calla lilies, spathiphyllums, and many more.  Native plant enthusiasts might be familiar with arrow arums, sweet flags, and additional species.  Bring some of these to mind, and in your mind’s eye you will see a flowering spike called a spadix in association with a modified leaf called a spathe.  On those red florists’ anthuriums the spadix looks like a bumpy cigarette;  the spathe is that waxy scarlet leaf alongside it. Usually the spadix is not showy, and the spathe is the colorful flag. Or to phrase it for us native plant buffs, Jack is the spadix in the pulpit is the spathe.

In golden clubs the vestigial spathe is effectively absent. The spadix has taken over the showy function. It puts the golden in golden club. And what pollinator is lured to that goldfinger?  Apparently species of flies, with room for more research.

The pretty yellow spadix has numerous little flowers embedded in it. Toward the base of the spadix the flowers are bisexual, and toward the top the flowers are male. The bisexual flowers mature into a blue-toned fruit with one seed. The seed is separated from the fruit by a layer of Jell-O of unclear significance. Maybe the goo  gives the fruit buoyancy.  Maybe it sticks to a bird’s foot or to a passing gator or to the leaf on a waterlily.

Posted by George Rogers on February 6, 2015 in Golden Club